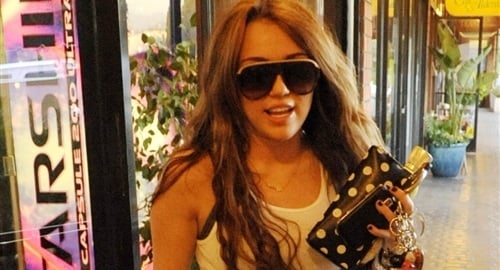 Miley Cyrus wore a wife beater and headed to a tanning salon yesterday in the hopes that a MTV casting director would see her and offer her a role on the upcoming season of “The Jersey Shore”.

Sadly for Miley no one of importance took notice. However, there appears to be an interesting phenomenon going on in the crotchal region of Miley’s shorts. The fabric of her shorts is being sucked up into her cooter, willfully defying the laws of gravity. The only plausible explanation could be that Miley’s crotch has developed a black hole.

I am sure scientists are still trying to calculate how long we have until Miley’s crotch black hole engulfs enough mass to expand exponentially sucking in our planet, and most likely the whole Milky Way galaxy, into her privates. With what little time we have left check out these terrifying pictures of Miley Cyrus’ short shorts covering the black hole that will surely kill us all someday soon.