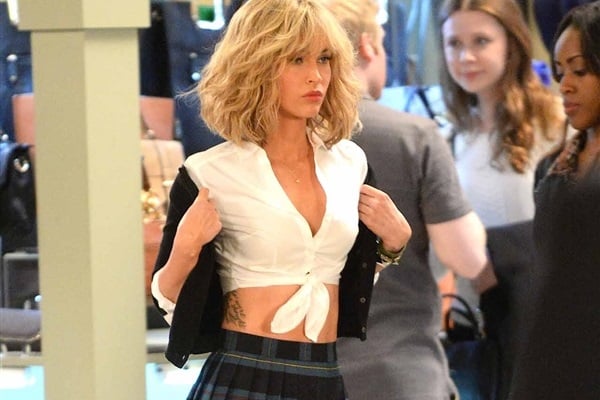 In “Teenage Mutant Ninja Turtles 2” Megan Fox reprises her role as “April O’Neil” a spunky woman journalist who enjoys hanging out in the city’s sewers getting gang banged by gigantic turtles. In the scene being shot in the photos below, Megan goes undercover at the mall to infiltrate a group of popular high school kids, and get the inside scoop on what teens today really think.

Of course the fact that Megan Fox looks damn near 50-years-old quickly gives her away, and all the cool teenagers turn on her and tease her mercilessly until Megan’s monstrous turtle friends show up and f*ck their shit up. The rest of the film is really just the turtle freaks kicking kids in the face, a bunch of explosions, and Megan running around in low-cut tops. Needless to say producer Michael Bay has another blockbuster hit on his hands.