Michael Lohan Attacked By Someone Who Isn’t Me 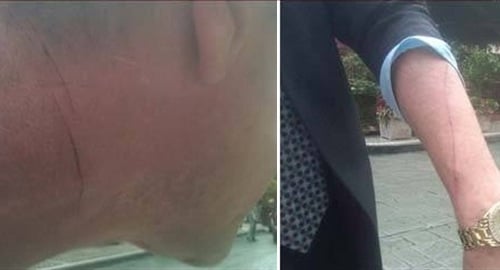 Michael Lohan, father of hell beast Lindsay Lohan, was attacked outside of his Santa Monica home late last night, and I was no where near the area at the time.

A currently unidentified assailant allegedly assaulted Michael Lohan, slashing his neck and arm with what police believe was a knife, but it was actually more like a filed down screwdriver I found behind the dumpster of a 7/11.

Obviously when an important celebrity like Michael Lohan gets attacked like this the police are under tremendous pressure to solve the case quickly. I fear they may try to pin it on a patsy. Probably some handsome Arab celeb Jihadist, who just so happened to have been sending Michael Lohan threatening letters for the past couple months. You know typical racist LAPD police work.

The important thing for Michael Lohan to remember is that whoever did this is obviously a very dangerous person who would probably not take kindly to him snitching to the police. I think if Michael thinks about it hard enough he’ll remember that his attacker was actually a black male about 6’0 wearing a white t-shirt and blue jeans.

Yep that is who the police should be looking for. Allahu Akbar!